This paper reviews several fundamental concepts which were “discovered” and explored several times over the years by Prof. Thomas L. Petty, (1932–2010). Prof Petty was a very well known American doctor who dedicated many years of his life plus a great deal of energy to making available to a wider public a range of scientific truths which are at the base of modern spirometry.

* Thomas L. Petty, MD (1932-2010) was chairman of the National Lung Health Education Program, Prof. of Medicine and Faculty Consultant for HealthONE Center for Health Sciences Education at University of Colorado Health Sciences Center of Denver, and a member of the Editorial Advisory Board at RT Magazine.

"TEST YOUR LUNGS, KNOW YOUR NUMBERS" (1)
This was the motto (1) of the NATIONAL LUNG HEALTH EDUCATION PROGRAM (NLHEP) of which Prof. Petty was Director, and for which he wrote some memorable articles. In his editorial entitled "SPIROMETRY FOR ALL" he said referring to physicians (1) "certainly no one would give insulin without checking blood sugar"…"or an anthypertensive without measuring blood pressure". Likewise "few [physicians] would give antiarrhythmics without electrocardiographic evidence of a cardiac-rhythm disturbance". (2)

"Why, then, would anyone give powerful medications such as inhaled oral bronchodilators (or, particularly, corticosteroids, with their attendant adverse effects) without first measuring baseline lung function so that one can observe responses to therapy? How could anyone know when maximum therapeutic benefit had been achieved without airflow and air volume measurements?". (2)
It seems incredible but this is what often happens in real life.

"NO ONE CAN MANAGE ASTHMA ADEQUATELY WITHOUT A SPIROMETER" (2)
This is the introduction that Prof. Petty used in his article titled, "SPIROMETRY IS KEY IN ASTHMA MANAGEMENT" where he wrote about Asthma, an obstructive respiratory disease with a high prevalence among the population of all ages.
"Systematic use of spirometry is critical in assessing the severity of asthma, the patient's responses to therapy, and the disorder's course over a lifetime". (2)

"SPIROMETRY IS MORE VALUABLE IN PREDICTING PREMATURE DEATH FROM HEART ATTACK THAN THE ELECTROCARDIOGRAM" (1)
This claim is probably the most dramatic claim among those promoted by the National Lung Health Education Program (NLHEP), led for many years by Petty.
This is because spirometry provides simple measurements to express very complex processes. These processes range from the muscular effort necessary to perform the test, to "small airways function, large airways function, and interdependence between alveoli, small airways and large airways" (1). In addition spirometry provides information on the full cardio-respiratory system: "spirometric measurements are useful in monitoring the patient's state of cardiovascular compensation in chronic congestive hearth failure or following acute myocardial infarction". (3)
This concept, shocking to the non-experts, has been repeatedly confirmed in international peer-reviewed scientific publications. "The Framingham Study (4-5) revealed that a reduced vital capacity was predictive of premature death from heart attack. Other population studies (6) have confirmed this observation". (7)
****
"The spirometer was invented and introduced into medicine in 1846 by John Hutchinson, a surgeon. Hutchinson coined the term " VITAL CAPACITY" because he recognized that this simple measurement of the volume of air that can be exhaled from fully inflated lungs correlated with survival. When reduced, it predicted premature mortality". (7)
So the term VITAL CAPACITY "(the capacity for life)" (1) was a therefore far from casual. Hutchinson found "that vital capacity was directly related to the height and inversely related to the age of both men and women" (1). Also, there are formulas to calculate the normal range for this value as well as for others parameters that form the basis of modern spirometry. "Normal spirometric values are a function of age, height, sex, and race (due to variations in habitus)." (7)

In addition to VITAL CAPACITY there is another very important parameter to evaluate lung function. The FEV1 represents the maximum volume that a subject can exhale in the first second. This parameter has introduced "the concept of timed vital capacity" (1) or "the concept of flow". (1) 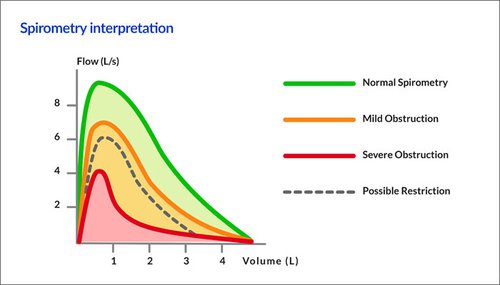 No further parameters, nor expensive and complex laboratory equipment, are needed to analyze spirometry. The "good fortune" of this test is related to the recording of a particular curve that plots the velocity of exhalation (or expiratory flow) against the volume of exhaled air (named Flow / Volume curve). his curve is like a unique "fingerprint" of the lungs for each subject. Practically everyone has his or her own characteristic curve that compared to the normal curve provides a simple, highly accurate and highly predictive, "future" assessment of our lung function. The following diagram has wide ranging implications which are not widely known. This chart was developed by Hyatt and refers to obstructive lung diseases, the most widespread among respiratory diseases. Just consider Asthma and Chronic Obstructive Pulmonary Disease (COPD). The graph very clearly illustrates that the predictive value of spirometry is higher than other diagnostic tests such as Chest X-rays, arterial blood gas analysis or the presence of respiratory symptoms. 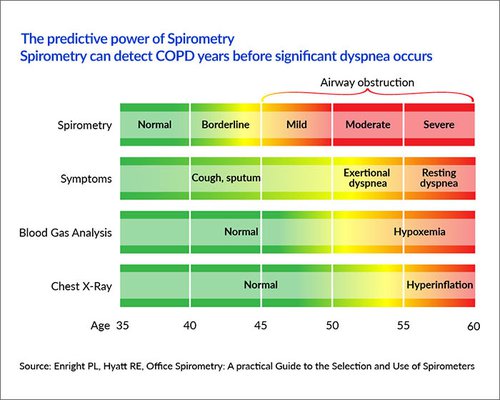 The graph points out (even to the casual observer) that a spirometry test is able to identify an obstructive respiratory pathology between 5 and 15 years prior to the other techniques! And it is well known in the field of respiratory pathologies that in most cases the symptoms do not help simply because the majority of cases are without symptoms. For example in the case of a smoker, the COPD will continue its ongoing development without the smoker complaining of any major symptoms. However, when the sysmptoms do start to become a problem then a large part of the lung function is already irreversably compromised. Below we show how the symptoms usually show themselves only after the FEV1 is greatly compromised. 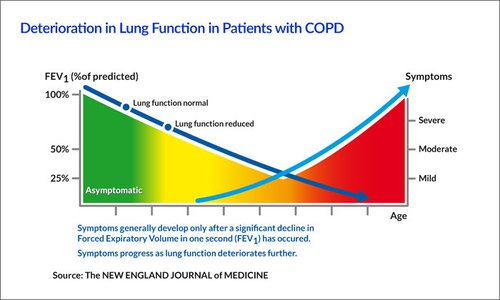 "IMPORTANCE OF SPIROMETRY TEST" (1)
Petty claimed: "even today, the importance of the vital capacity is ignored by the insurance industry, but it could have powerful predictive values because it is indicative of premature deaths from all causes ".
(1) As we started, so we will close this brief report with a final question from Prof. Petty."Why not include spirometry as part of the physical examination, just like blood pressure?" (8) 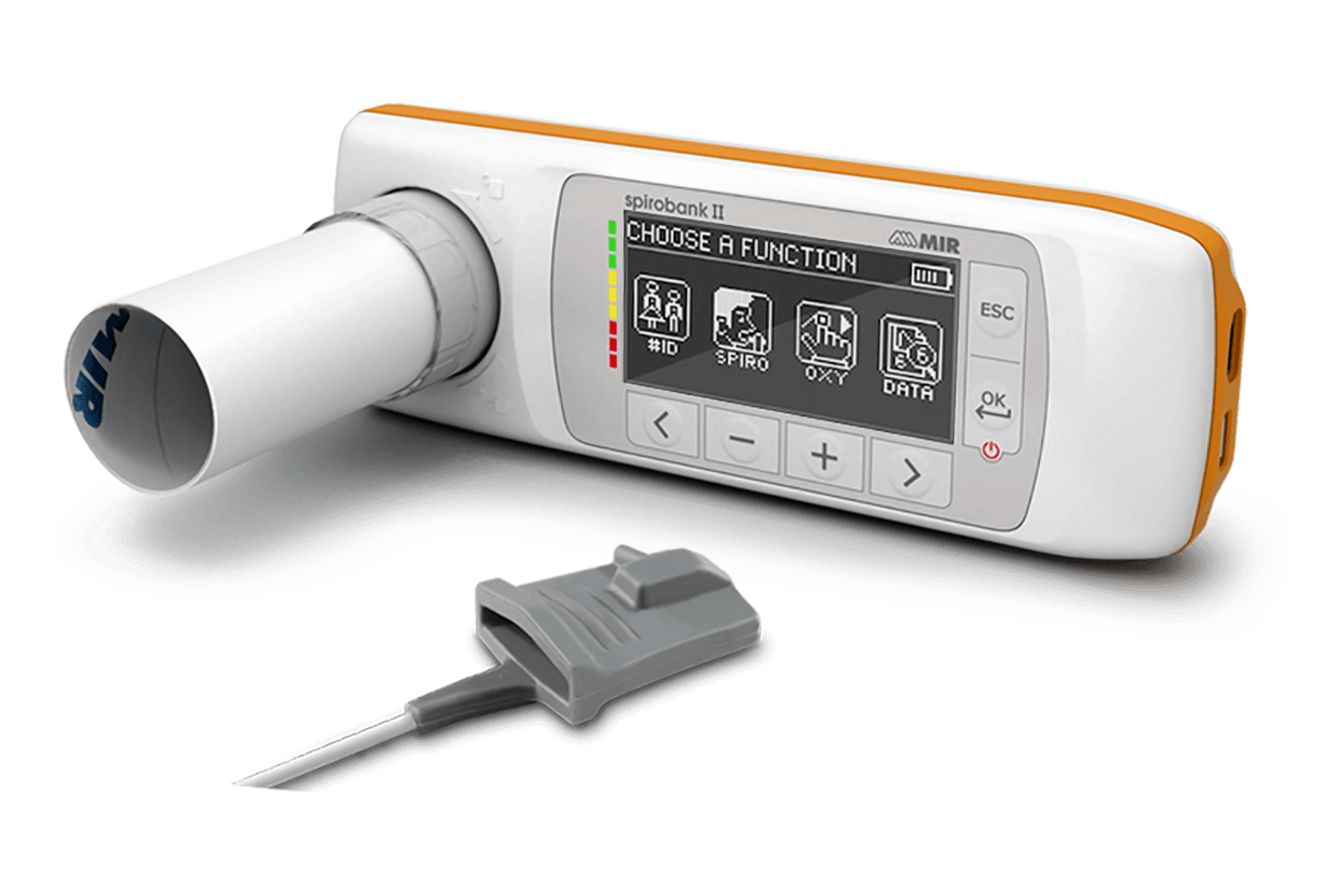 Share:
Measuring our breath: important as measuring our body temperature
Spirometry and Oximetry in neuromuscular diseases